Two years ago, my class hosted a Reader's Cafe. You can read the full blog post here (and you really should or you might be lost in this post), but to summarize, my students chose and practiced reading three books, wrote varying levels of comprehension questions for each books, selected and rehearsed the jobs of host, waiter, chef, and busperson, and ran the Cafe for the whole school.

We didn't get to host a Cafe last year, due to state testing lasting until the last week of school, but this year we had two weeks between the end of testing and the end of the year. Rather than filling this with movies, kickball games, and other time wasters, we decided to host the Cafe. This year, we made some changes from the original plan. The basic structure and jobs stayed the same, but these changes helped to improve the experience. 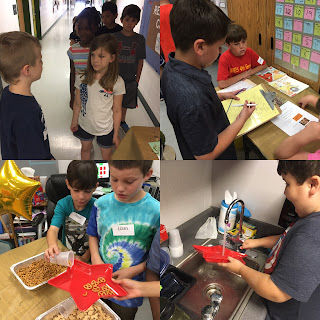 I introduced the Cafe model to my class with a written slideshow and verbally explaining it. I didn't have many pictures from when I first did it with my student teaching class, so I had no real visuals to show them.

NOW:
Introducing it this year was significantly easier than last time. I showed them the recap video that we made after the 2015 Cafe and fielded questions afterwards. We still followed the same steps in preparing - choosing books and writing questions first, practice reading the books, explain and pick jobs, and rehearse the whole thing.

THEN:
Students developed comprehension questions, including a mix of literal and inferential questions for each book - one before reading, two during, and one after. They then typed these questions into a Google Doc, which led to a number of formatting issues. 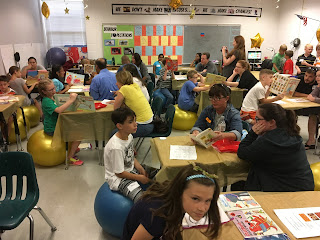 THEN:
Eight families attended the 2015 Cafe and had very little interaction beyond that.

NOW:
This year, we had much more support from the families. 26 of 29 students had a family member visit, which was a huge uptick from the eight families who came last time. The parents also got more involved this year. They offered to donate money for food and supplies. One of their parents works in the building and saw that I chose gold as my theme color for this year (I had some leftover supplies from my little sister's Gold Award ceremony). When I came in the next morning, I was greeted with 30 gold streamers, a bag of gold confetti, six star balloons, and four balloons that spelled out READ. I placed these balloons in the hall, which helped hype up the whole school.


FEEDBACK
THEN:
Feedback for readers was non-existent. 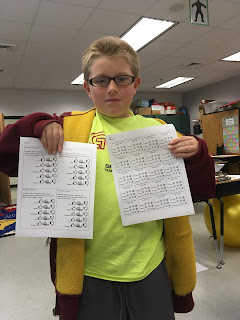 NOW:
The biggest change in the Cafe didn't come from my own work - it came from a student. The Friday before we were to begin presenting to various classes for some practice rounds, a student came to me with an idea. He asked, "Mr. B, wouldn't it be cool if our customers had a way to review our reading so we knew what to improve?" I love student agency in their learning. I said to him, "I like it. Work up a prototype and let's talk on Monday."

This student generally steps back and is shy in class. He lets others take the lead, even though he is capable. It was so incredible to see him take charge and truly make something his own and then present it to the whole class. His mom even noticed a change in him:


"I really enjoyed the Readers Café experience. It was so awesome to see how much [Student] has grown. I am very proud of him in many ways and I attribute a huge part of his growth to your teaching style and support. He seemed to just blossom upon your return [from medical leave]." 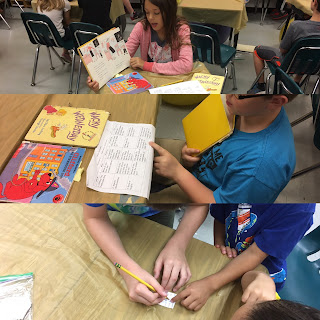 THEN:
My former school had roughly 500 students, in about 25 classes. We were able to fit all of our rotations in two and a half days, with five minute transition times between classes. These times soon became chaotic as we waited on different classes. Both the hosts and the waiters dismissed the customers, which was overkill.

NOW:
This school is over 900 and over 35 classes in total. We had to modify our timing and increase to three full days to accommodate nearly double the amount of customers. Rather than having a 5 minute rotation time, my students had 30 seconds. This actually was a huge blessing. Students had no time to get off task between rounds and helped the whole experience flow much more smoothly. Additionally, the hosts would help get the next class ready as the waiters did the dismissing. This helped give everyone something to do, as the chefs would be refilling the food and the buspeople finished washing and drying dishes.

This year's Cafe was even more successful than the 2015 one. The feedback slip really helped to tie it all together. Our final tallies are below, along with the promo video we produced afterwards. I look forward to continually tweaking the Cafe model to be even better in the future. I'd like to hand over the logistics (timing, amount of food to buy, etc) of the Cafe to the students, which would add a level of math integration to it. On Twitter, I saw someone had adapted it for a Math Cafe model and I am interested in that. Perhaps I'll do a Math Cafe before winter break and continue with Reader's Cafe at the end of the year. Stay tuned to find out!