"By playing games you can artificially speed up your learning curve to develop the right kind of thought processes."
-Nate Silver

It's the end of the year for many of us. It's a time to review old learning, but kids are probably sick of the same old pony tricks. I recently wrote about four of my favorite review games for Kids Discover to play with my students, including Scavenger Hunt, Scoot, Basketball, and BoardRush. This past week, we played two more that I wasn't able to include in that post. Looking for two games that combine physical activity, collaboration, competition, cost-benefit analysis, review and fun? Read on for two ideas to use in your classroom. 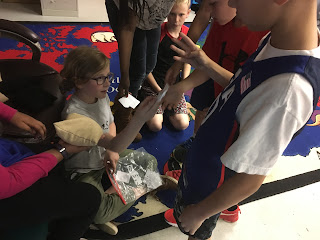 I've been playing Survivor with my students for years, in both math and history. It's a favorite for both them and me, but I only bring it out once or twice a year. Why? It's a time-intensive game, with a number of rules, that works best as a culmination of an entire curriculum rather than a unit. It's almost important to note that it's a learning tool - overdoing anything will kill it for kids.

It's partially based on the CBS game show, but this game has many more layers to it and no chances for immunity. Under the rules we've developed, players start with 10 "lives." When we play this in history, I give them printed pieces of paper labeled Charters to reinforce the impact of the charters to the Jamestown settlement. They're also put into different groups, based on influential famous Virginians.

They we delve into the rules:

It's amazing watching them strategize with other teams and form alliances to start knocking out other teams. The most recent time we played, one team was knocked out about four times by the end of the game. (This led to some feelings of sadness from the team that kept getting eliminated, but I reminded them that it was just a game and they could have chance for revenge later.) If a team is knocked out, they have an opportunity to rejoin the game by getting an answer correct and tossing the ball. If they make it into the white basket, they earn 5 Charters back.

Along the way, I throw in different challenges (called Hardships to tie in with our history theme) and bonuses (also called bribes to the King). Some challenges include having to give up charters to a specific team based on the team's namesake (such as all players depositing one Charter into Maggie Walker's bank to reinforce that she was the first African American woman bank president) or losing charters entirely to me (to help show the impact of the King of England taking unfair taxes from the colonists). For some bonuses, I ask additional questions to earn more charters or extra tosses, or have them engage in a bidding war for different sabotages, such as blindfolding other teams or buying all of the other teams chances to shoot. The highest amount of charters offered to me wins.

At the end, we have one final speed round, in which teams can earn two additional points per question. I usually take first correct response for the point, and often award ties. Playing The Final Countdown or Eye of the Tiger isn't required, but highly recommended. 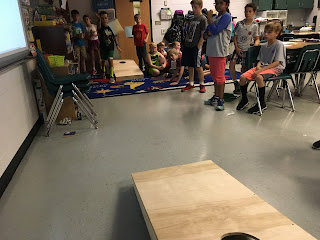 Cornhole is possibly my favorite summertime game, tailed closely by Kan Jam. The other day when I was pulling my car into the garage after work, I saw my set and began wondering how I could bring it into the classroom. Later that evening, I was discussing Cutthroat Kitchen on Food Network with Katie Kraushaar (since I apparently am obsessed with game shows) and Cutthroat Cornhole was born.

The premise is simple - we play cornhole in class and answer review questions. However, that's too basic. Five questions are given per round. For each correct answer, each team earns a point. The students are grouped in four teams (Black 1/2 and Yellow 1/2, based on the colors of my beanbags). At the end of the round, teams get to choose what they want to do with their points:
The points from the question answering do not count for overall scoring. The only points that count are the points scored in cornhole, and we follow the "cancellation" rules of cornhole. Black 1/2 are working together against Yellow 1/2.

I was sure that my students would start spending their points immediately. However, for the first three rounds, not a single bag was thrown. Eventually, some teams ventured to spend their points on some standard throws.

Finally, one team purchased a blindfold and then the real sabotages began. Pro tip: make sure everyone is looking before a blindfolded kid throws a beanbag, and don't be afraid to guide them to the right direction. We had one kid take a beanbag to the face since she wasn't watching the throw, but she was unharmed overall.

In the final round, one team had saved something ridiculous like forty points. They spent them all in one fell swoop, effectively buying every sabotage and advantage. Unfortunately, the school day ended before we could watch that carnage unfold.

While we know that time is precious and we don’t want to waste a moment of instructional time, it’s also important to infuse learning with physical movement. The investment in activity will surely pay off in heightened engagement and an increase in achievement. Students have an allotted time for Physical Education classes, but 45 minutes once or twice a week isn’t going to cut it, especially with the CDC recommendation that children and adolescents get a minimum of 60 minutes of physical activity every single day.

It's also important to note that these games do not have a prize for the winning team, aside from bragging rights. To me, playing a review game in class is reward alone, and I don't believe that everyone needs a prize for every single little thing. I rather my students be engaged because they want to demonstrate their knowledge and have fun playing a game rather than working towards some sort of extrinsic motivation.

These games may sound a bit complex, but the kids genuinely love them and it's worth it. I'm happy to answer any questions you have about them. Try them out for yourself and let me know in the comments below what modifications you make for your own students.
Posted by Justin at 7:47 AM 5 comments:

Due to being a 1:1 Chromebook classroom and my general feelings on the importance of technology integration, my students take many of their assessments (or "opportunities [to show our learning]" as we call them in class) with Google Forms. This is great because it cuts down on the amount of paper I need to print (and the time spent copying, handing out, collecting, etc etc.) 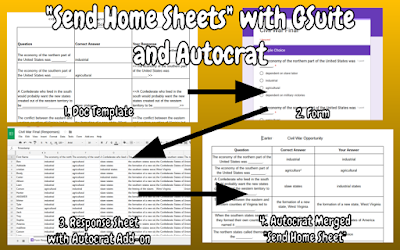 However, with students completing their assessments completely on their Chromebooks (including receiving their score, feedback, and some immediate remediation), parents and families don't get to see their child's results like if they had a paper/pencil assessment and thus can't work with their students to help them improve. I do check and send home their written work for math assessments, but many history and language arts assessments are completely digital. If we truly want parents working with their students at home, we need to be sure that they can see where the students have made mistakes, along with the questions and correct answers.

One of my favorite Google Sheets Add-ons is Autocrat. It's a powerful tool that essentially allows you to create a mail merged Doc from a Form/Sheet.

For a brief bit of background knowledge on Autocrat, it operates with tags that appear like this: <<response>>. (I sometimes call the tag arrows "carrots.") You create a Doc template with <<tags>> in place of things you want inserted from the Form/Sheet. For example, if I wanted to ask a question about what a student thought the capital of Virginia was, I would put <<Virginia capital>> or something similar on the template Doc, and when I run Autocrat, it would fill it in with their response (which would hopefully be Richmond!) This can be set up to run automatically, and once you get the hang of it, it's incredibly easy to use. I'll admit that Autocrat isn't the easiest thing to explain in a blog post, but the video tutorial will make more sense.

Using Autocrat, you can make a Google Doc that inputs each student's responses from a Google Form assessment, along with the question and correct response, which I call a "Send Home Sheet." You can then print them or have them automatically emailed to parents for them to review and help begin remediating. Watch this video to see exactly how to do it.


When all is said and done, it takes roughly 5 minutes to set that all up. Copying and pasting from the response sheet saves lots of time in the "mapping tags" step, and keeps the formatting in nice and even columns.

Part of the benefit of doing assessments on Google Forms is the elimination of paper. This method seems to directly conflict with that, but in the long run, it's still less paper. My students recently completed an assessment that was 23 questions. If each question (and all four to five answer choices) were printed, it would have been 7 pages.

However, but using some clever formatting on the "Send Home Sheet," it ended up being 1 page front-to-back (lots of the saved room came from not having to print all the answer choices and the fact that a three column format is more efficient than one question per row). For my class of 29 students, I was able to print all of their "Send Home Sheets" in less than 30 pages versus the over 200 pages it would have required to print paper-based assessments. If you opted to send the results directly to email, no paper would have been used at all. (Personally, I use a Drive app called PDF Mergy to combine all 29 "Send Home Sheets" into one PDF and print that.)

Furthermore, by using the Quiz feature on Google Forms or Flubaroo, I didn't have to do any of the grading by hand. I'm a big fan of letting technology do as much of my rote tasks as possible so I can focus on using the assessment results to work on remediation.

Finally, and possibly most importantly, some parents aren't ready to accept that they might not see their student's work. This is a valid feeling, because if they want to help (and we need them to play a vital role in their child's education), they need to see where the gaps are. "Send Home Sheets" allow the best of all worlds - less paper waste, more time for the teacher to work on more important tasks, and gives the parents something tangible to review.

Give it a whirl in your class and let me know in the comments below how it works out for you!
Posted by Justin at 7:27 PM 47 comments: