One Four the Books

"Give me four years to teach the children and the seed I have sown will never be uprooted."
-Vladimir Lenin*

I'm a sucker for puns. My "goals" post for my fourth year of teaching in 2016-17 was called "Going Fourth Into a New Adventure" and now I'm laying down "One Four the Books." Go ahead, you may groan. I'll wait four it. At least I had the four-sight to warn you.

Be-four (last pun, I promise) we reflect, let's recap my goals for this year:

I had (and beat) cancer this year. I was out of the classroom for three months, which made many of these goals hard to meet. To be honest, I fell short on nearly all of these goals. I did not amp up 20Time. It basically was an independent research project again. I started daily vlogging, until October when my life basically fell apart. I tried to get back into it after returning to work, but never found my flow.

Student-led learning and my instructional/assessment practices did improve, but not to the degree I wanted them to. I started strong with growth mindset and it remained a theme throughout the whole year. I would say that is the only goal I fully met that I had set for myself.

I didn't get to try too many new things either. Among the few new ideas were some new review games, continual tweaking of Choose Your Own Adventure experiences (read about first method, second iteration, and student-created versions here,) using Autocrat for communicating digital assessment results home, an emphasis on number talks, revamping Reader's Cafe, and some other ideas I never wrote about. Maybe it seems like a lot of new things, but to me, I feel like I could have tried something more. 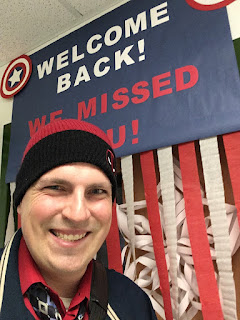 Am I disappointed? Maybe a little. Those were important goals to me back in September, but new opportunities arose from facing cancer (not something you'd expect to hear from a cancer survivor). I got to model resiliency, grit, and a real-life example of growth mindset. I had a perfect example of sharing vulnerability and honesty with my students. They're now prepared to realize that cancer is not always a death sentence.

It helped me build strong relationships with my students, stronger than they would have been without having time solely dedicated to writing back and forth to them every day as I went through chemo treatments. In this post on Dave Burgess's blog, I share about how I learned new things about my students and their lives. I wasn't concerned with their academic growth at that time; I wanted to get to know them deeper as young people. When I returned, I was able to keep these bonds going, but not to the depth I could do then.

My end-of-year evaluation from my principal said, "Mr. Birckbichler had a school year that would best be characterized as one he will never forget," which is certainly an understatement. I'm honestly not sure how I feel about this year. My state test score pass rates were the best I've ever had, and their growth from third to fourth grade was similar in regards to other years. Pass rates have never been important to me, but it's always worth noting that according to the state, I was proficient in my teaching. Growth has always been the metric in which I measure myself in, and I'm pleased to see that I met that goal this year.

One thing I did much better was achieving balance between personal and professional life. Cancer taught me many lessons and chief among them was to focus on my personal life before teaching. If I'm not taking care of me, I can't take care of them. I made a conscious decision to not work on school work after school. I went in an hour earlier than normal, and once I left the building, it stayed there until morning. Occasionally, on a Sunday, I would work on lesson ideas, but only if it was something that truly inspired me. 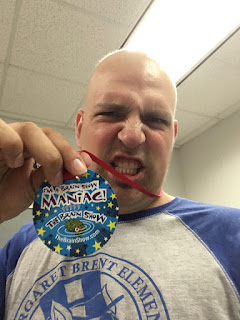 Towards the beginning of my diagnosis, I made the decision let go of many side projects I had been working on, such as the EduRoadTrip podcast, Breakout EDU Digital, and others, to focus on my health. After finishing chemo and being found in remission, I decided to make that choice permanent. While these were fun projects and I enjoyed working on them, they took up a great deal of time - time I could better spend focusing on my personal life or my students. If it wasn't something that had a direct benefit to my classroom or to my own life, I let it go. While this may come off as a selfish statement, I think teachers (especially those on Twitter) have a huge tendency to overcommit themselves to projects that ultimately won't have a meaningful impact. These were my first steps in a concrete plan to be less busy.

Next year, I'll be teaching fourth grade again, but at a new school. While this is two classroom changes two years in a row, it's important for me to be closer to home. My school was amazingly supportive of my medical leave and I am forever grateful for that. However, part of my goal with buying a house was to have a shorter commute, but I ended up with a longer one (curse you, I-95). My new school next year is 8 minutes from my house, and I passed it every day on my way to chemo. It seemed like a sign I needed to be there.

I know I referenced cancer multiple times in this post, but it really defined my year and will continue to have a large impact on my life going forward. I try to keep my identity as a cancer survivor on a separate blog (A Ballsy Sense of Tumor, which I highly recommend reading and sharing with the men in your life) but for a reflection post, I couldn't ignore the elephant in the room. It had a large impact on me, and changed my outlook a great deal.

So what's the plan for year five? I have no idea as of this writing. My wedding is in less than a month, followed by a honeymoon to Hawaii for some much needed relaxation time (even though I missed three months of work, it certainly wasn't relaxing). I just had another set of scans and I'm still cancer-free. Next year is far from my mind. I know I will make the commitment to maintain a balance and set goals, but right now, I am perfectly happy to embrace the end of the year and the start of summer, just as my four-fathers would have wanted (ok, I lied and this is the last bad pun).

Email ThisBlogThis!Share to TwitterShare to FacebookShare to Pinterest
Labels: Reflections