"What power to be able to talk about your own strengths and weaknesses instead of your parents and teachers talking about you behind closed doors."
- Parent of child in my class

Imagine parent-teacher conferences. You probably envisioned a new set of parents (with no child in sight) entering every fifteen minutes, with the teacher speaking a mile a minute. Later, the parents would go home and either praise or criticize the child for the report they just received. (I'll be honest, every year I heard, "Your teachers said you need to stop talking all the time! But your grades are fine!")

However, our conferences were different this year - I probably spoke about fifteen minutes total all day. The student developed, practiced, and led the entire conference this year.

This year, my classroom is a student-led learning environment, thanks to Learn Like a Pirate and the help of Paul Solarz. While preparing for conferences, I realized that with the students in charge of their learning, it made sense to have them lead the conferences.

First, I introduced the idea to my class. I asked them why they thought we were doing it. They expertly made the connection between student-led learning and the goal of the conferences. They seemed excited; for many of them, this would be the first time they even attended a conference, let alone run it.

I set up a template (feel free to Make a Copy) and sent it out to them. They were to self-evaluate their strengths and weaknesses in all academic areas and set a goal. I also tasked them with developing a goal for their learning and behavior. The template included an introduction and closing, where I tasked them with formally introducing me to their parents and vice versa. For many of them, it was the first time they had spoken Birckbichler in many months!

After completing their "script," (completed example here) they partnered up and began practicing. One student would play the role of parent and the other would be the student. Part of their closing was to ask their parents for questions, so this was practiced too. I also practiced one-on-one with the students, providing feedback on both their information and presentation.

On the parent side of things, I notified them all that they would be bringing their child to conferences. Using Google Forms (along with Choice Eliminator, FormMule, and AutoCrat) parents selected their times and were sent reminders with time and the fact that the child had to attend, a tip I got from Allison.

The preceding steps spanned about four days. We only had about 30 minutes each day to work on this, which meant some students did not have a lot of practice time. However, the conference day approached.

On the day of the conference, I asked the students to dress professionally or business casual. Every single student met this requirement, and some have even continued! For each conference, the students sat down on one side of the table with me, and presented their conference to the parents.

They all did a fantastic job! Most everything they said was accurate and reflected what I would have said. In reminder letters to parents, I asked them to ask their child questions and all parents did a great job targeting points I would have fleshed out myself. If a question was directed to me, I tried to give a succinct answer and divert it back to the student. I wanted to stay out of it as much as possible and let the students shine. The students did a tremendous job of thinking on their feet for the responses to questions they may not have had an answer ready for. 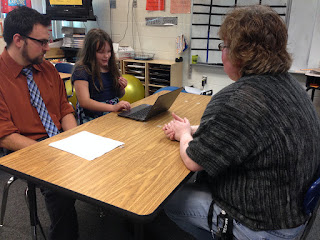 Parents, students, and I were all amazed. I was very impressed with how honest and critical students were of themselves. They were able to examine their own learning, articulate it to their parents, and set realistic goals. Afterwards in class, I also asked students to write reflections, of which I will provide some brief snippets from their much more in-depth responses:
I also reached out to the parents to get their thoughts: 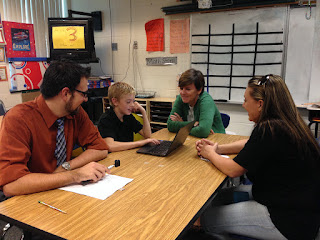 What would I do differently in the future? I would have liked for the students to have different samples of work and assessments. They would explain the grades (examining if any low scores were due to testing problems or content knowledge) and how to improve or further challenge themselves. I plan to start the students tracking their own results this quarter with this similar strategy. I would also like to do a second conference; where the students reflect on the goals they originally set and how they have worked toward achieving them. Along with this, I would have them set a more specific goal. I would allot more time to work on this too to give students more time to practice.

I feel it was a very beneficial experience. How often do students get to share their feelings with their parents and teachers in a formal setting? Like the opening quote reflected, many decisions about students are made without them behind closed doors. We expect students to be responsible for their own learning, but then don't include them in the process. It seems backwards to me. The goal of education should be to empower all students to succeed.

Below you will find a video of two students' conferences. What can you learn from them? How can you do this in your own classroom? Let me know in the comments.