When a Student's Parent Dies

This post was initially written in May/June 2017. I've sat on it since then to let the student appropriately grieve, but he's agreed that sharing it may help other students or teachers experiencing the same thing.

I walked into the office on Monday morning and gave my customary greeting to the administrative assistant.

"Good morning, Mr. B. One of your student's mother called. His father passed away this weekend. He won't be in today."

Wow. Not what I was expecting to hear. My first thoughts went immediately to how my student would handle this. He doesn't live with or see his father often, but there is no denying that this boy loves his father like nothing else. When his dad comes for a visit, I hear about it for the week leading up and the week after. I knew this would be devastating news to him, as would be for any child.

This student is one who has had displayed some challenging behavior in the beginning of the year. He came with a reputation, but I made it a goal to see him only in a positive light. Some days, he makes me want to tear my hair out, but I always know he is trying his best and we focus on that. On those days, he always shows genuine remorse for his choices and works to atone for them. He's made considerable growth, both academic and socially throughout the year.

I sent his mom a quick message on Remind, saying I was sorry to hear of their loss and that they were in my thoughts. She responded a few hours later thanking me for my message and that he would be back to school the next day. What's more, she said he spent the day studying for his upcoming end-of-year assessments. Getting him ready for those tests was the last thing on my mind.

The next morning, he slowly shuffles into the room. I wasn't sure what I was expecting. Normally, he comes in like a wrecking ball or perhaps more akin to Taz the Looney Toon. Today, he was quiet and I could tell his eyes were heavy with tears.

I decided to forgo the customary handshake and gave him a quick hug. I asked him how he was doing.

Understatement of the century, I'm sure. I told him that today he could just take it easy. He started unpacking and began in on his morning work, which was a review sheet about capacity. It was a skill he was very confident on and it seemed to get his mind off of the news.

While the rest of my students worked on their morning work or ready their free read books, I sat with him and just let him talk when he wanted to. Asking for help on conversions with cups to quarts were interspersed with him gradually revealing more details about how he was feeling. Out of respect for his privacy and trust, I won't be sharing them here.

What I will share is that I had to step back and just listen to him as a student and a person. Yes, we had state assessments in two days, but that wasn't important. He had a lot to process and he just needed to talk about it. I am fortunate to have both of my parents still living, but lost my grandfather a few years ago. I used that to try to empathize with him, but I know it's not the same.

I broached the subject of sharing the news with the class. What did he want to do? Did he want others to know? Did he want to share? Did he want me to share? He said that he wanted to tell a few of his friends and I respected that. It wasn't my decision to make for him. The last thing I would want in that situation for a million questions and sympathetic looks from his friends. He also wanted to tell the school custodian, which is a staff member he has had a long-standing relationship with. I told him he could visit him whenever.

The school counselor, social worker, and principal came in to check on him throughout the day. The message was clear from all of them - we are here to support you.

During that day, I pretty much gave him free reign. If he wanted to work on his schoolwork, great. If he wanted to talk quietly to a friend, that was fine too. If he wanted to rest his head, I wasn't going to argue. He needed to have time to process his thoughts, but I think he also wanted a sense of normalcy in his day.

The next day, he was a little more animated, yet still somber. I was anticipating that he would be like this for a few days, or possibly for the rest of the school year. My job was to be there for him. First, his teacher has cancer, and now his father passes away. Not exactly fond memories of his fourth grade year, but I could help him by being a listening ear and not the teacher who was freaking out about the state test tomorrow.

We played a review game for the end of year history test, which involved playing cornhole. He asked if he could help me retrieve the beanbags once they were thrown. I could tell he wanted a specific job to do, so I told him I would happy to have his help. Again, he mixed in some of his thoughts and reflections while answering the review questions.

That's a big takeaway from this all. He needed time and space to talk things through and just have someone to listen to him. I had to respect that, whether it was me or a peer. The person always comes first and this was the pressing issue.

On the day he had returned to the classroom, he was signed up to write our classroom newsletter for that day. I asked him if he wanted to do it still and he said he did. When I took it from him at the end of the day to shift it to the next person, I noticed he had doodled on it and had written a small note. With his permission, I'm sharing it here: 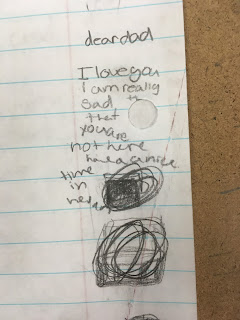 Fast forward a few weeks later to the end of the school year. I always give out awards to every single students. Some are serious (Most Improved Reader), while others are silly (Duckface Extraordinaire). For this student, I wanted to give him "Resiliency King" for what he faced this year. I asked him if that would be ok with him, as he had still chosen not to share his father's passing with the entire class. He said that it was fine by him and I could share the news with the class.

Our ceremony began and I got to his name. I told the story of what had happened and he interjected that he would like to speak. He got up and said, "It was a really tough time, but I want to thank my friends and Mr. B for helping me to get through it. Thank you all."

I don't cry much, but that got me on the verge of tears. It was his moment to shine and he was diverting the attention to others. I would not have expected that from him in the beginning of the year, and I am so proud of the young man he has become.

Despite me leaving the school, he was the only student who consistently emailed me over the summer. I asked him one more time to his permission before posting this.
Posted by Justin at 8:28 AM