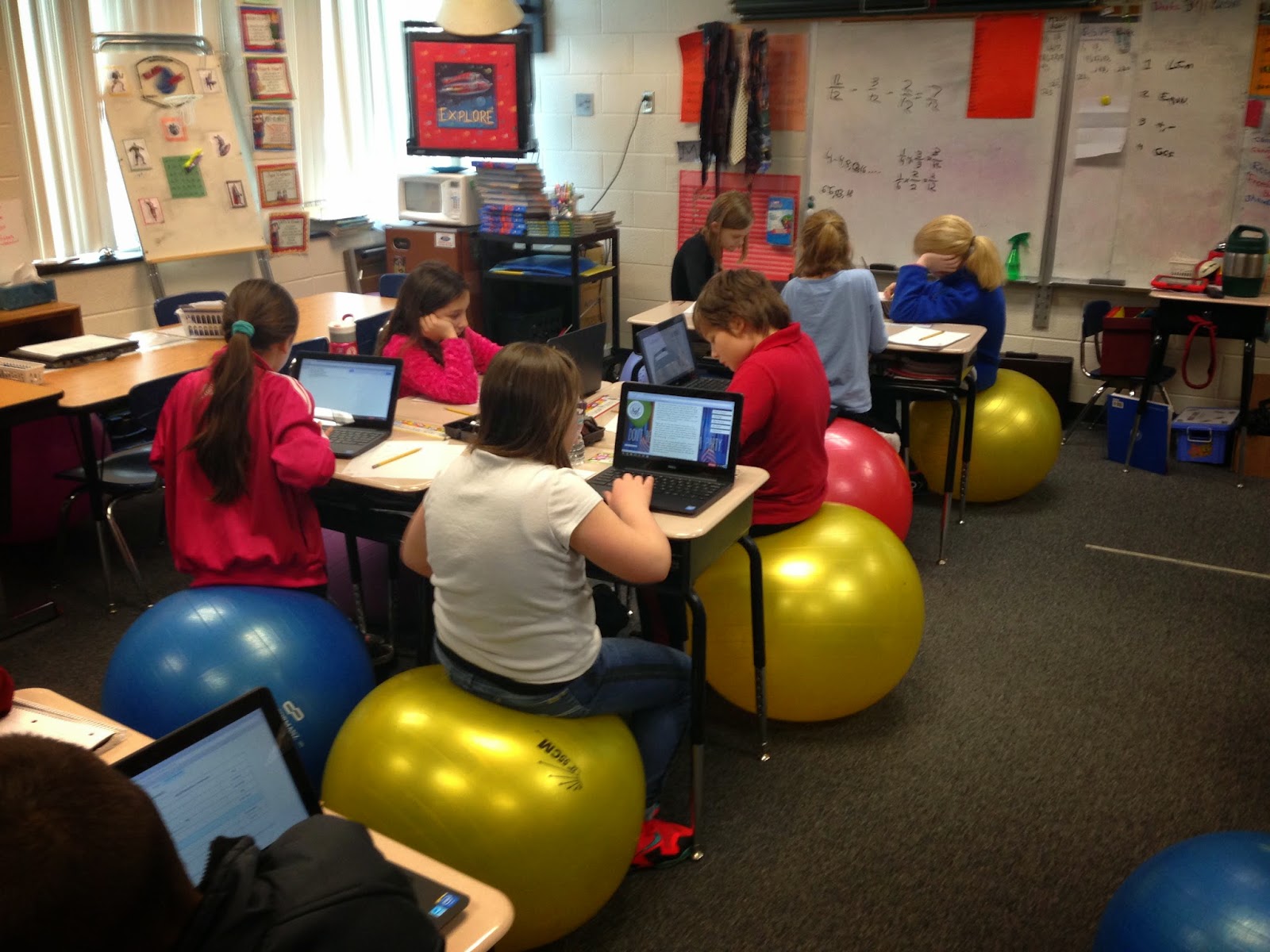 Take a look at my classroom. What do you notice?

You may have noticed the technology integration, the collaborative grouping, or the students seated on yoga balls. While the first two are also important in my room, the latter observation will form the basis of this blog post (as you may have guessed from the title.)

It all started at my end of year conference with my principal last year. After discussing how my first year went, she asked me if I wanted anything else for my classroom. On a whim, I said, "I would really like to try yoga balls as chairs." She thought it would be a good idea and said she would look into how to get that accomplished.

Now, I am a man of action and do not like to wait for things. Numerous colleagues, personal friends, and students can attest to this. That evening, I hopped on eBay to see how much yoga balls were. I saw I could buy a lot of 10 for $90. It seemed reasonable to me, so I ordered them.

While I was waiting on them to arrive, I brought in two yoga balls I already had at my house and gave them to two students to use. I chose these two students specifically because they had a hard time focusing, due to built up energy and ADHD. The effect was immediate. They could bounce around to let out energy and maintain focus. The other students were jealous and wanted their own. You can imagine their delight when I told them more were on the way!

More balls arrived, and I now had enough for half of my class. The students switched off days of having ball or chair. I had one guiding principle:

This year, I decided I wanted a full class set of yoga balls. Again, being a man of action, I decided to start a fundraising page on peerbackers.com to meet the goal. I set the goal of $400 to cover the original cost, cost for new balls, shipping, peerbacker/PayPal fees, and assorted other costs. The project went well and I raised about $250 in the first three weeks.

As momentum was dying down on the fundraising, I reached out to local newspapers and yoga ball companies to help spread the word. Of the newspapers/companies I contacted, The Northern Virginia Daily and Gaiam Yoga Ball Company responded to me. The NVD came into my classroom, interviewed some of my students and me, took pictures, and featured us on the front page of the paper. You can read the article here.

I received an email from Gaiam's Vice President of Human Resources, Jacki Abraham, asking for an address and how many yoga balls I needed. I gave them the school's address and that we needed 11 more, but I said even two would be a great donation.

A few days later, I was paged to the office. There was a large box addressed to me from Gaiam. I opened it up, and there were six balls inside! I was floored. The next day, five more arrived! Gaiam had totally covered the entire amount of balls we needed. We were very appreciative and wrote them thank you notes. We also filmed a Thank You video message to them on YouTube. I was also successful in raising all the money on peerbackers.com, which allowed me to use the money for extra balls and other classroom improvements. All the yoga balls belong to me, so they will be able to travel with me whenever I leave my current job. I also lend them out to other classrooms for them to use.

Yoga balls have had a great effect on the students' enthusiasm for school. It allows them to get pent-up energy out in a way that is not too terribly distracting. My classroom is very active and we are not at our seats often. This helps them to still move at the time we are at our seats. Some other teachers in the building are highly distracted and annoyed by their bouncing, but it doesn't bother me. At the end of the day, school is for the students.

As you see pictures and videos of us, you will notice some students do not have balls. Some students chose to not have a ball, while others lost the privilege (by bouncing too high or focusing on bouncing more than their work.) In addition to being a great way to release energy, it can help as a
motivational tool. Students can lose their ball depending on their choices, and earn it back after a few days or weeks by proving they can handle it. Generally, I start them all fresh with a ball at the beginning of every quarter. Some students have also popped their balls, in which case they can earn one back once their parents replace it.

I would definitely advocate for using yoga balls in place of chairs. I polled my former students how not having them has affected them in fifth grade. Many of them indicated it was hard to focus now and they weren't as engaged in class or comfortable. My current students definitely think it is a fun way to sit and it keeps them on task. I have heard third graders say they want to have me so they can sit on the yoga balls. I will admit, for the first two weeks the students are very "bounce-happy." The novelty wears off after about two weeks, and then it becomes the norm. It allows the students to move, which is something all students need.

Have you ever tried yoga balls in your classroom? What was your take on it?
Posted by Justin at 12:29 PM